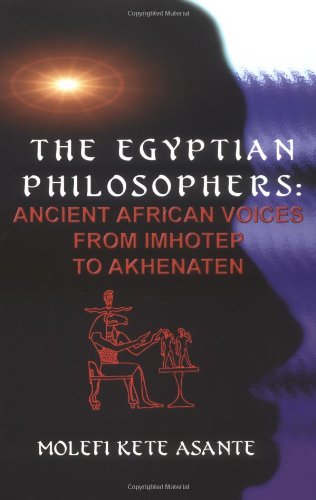 Since the 18th century, Greece has been heralded as the cradle of Western civilization, with Plato, Pythagoras, and Thales touted as the world's first philosophers. But as Temple University scholar Molefi Kete Asante writes in this slim, spectacular book, those men all studied in ancient Egypt and took credit for the concepts created by Imhotep, Ahmenhotep, Akhenaton, and other Egyptian intellectuals, scientists, theologians, and moralists. Asante, the major proponent of the concept of Afrocentricity, draws from a number of primary sources to reveal what he claims to be the true origins of medicine, astronomy, ethics, scientific inquiry, and civics. "The antiquity of African philosophy is unique and stands alone and is older than all other philosophies," Asante writes. "It would be much later, nearly two thousand years, before the Greeks, who were influenced by the Egyptians, would develop their philosophy." From 2700 to 1290 B.C., the Egyptians were the light of the ancient world. They produced many early medical instruments, designed the world's first step pyramid, and laid the empirical groundwork for scientific reasoning. Akhenaton, the rebel pharaoh, is even cited as "the Father of Monotheism." Asante stresses throughout the book that these developments came from a confluence of African cultures, and not from other parts of the world. "The practice of the African philosophers along the Nile was a practice of maintaining Maat [the principle of truth, order, and justice] in every aspect of life," he writes. "If we could only learn from them the value of harmony, balance, and righteousness, we would be on our way toward a revival of the spirit of human victory." --Eugene Holley Jr.
Show More

The Egyptian Philosophers: Ancient African Voices from Imhotep to Akhenaten

Disclaimer: The price shown above includes all applicable taxes and fees. The information provided above is for reference purposes only. Products may go out of stock and delivery estimates may change at any time. desertcart does not validate any claims made in the product descriptions above. For additional information, please contact the manufacturer or desertcart customer service. While desertcart makes reasonable efforts to only show products available in your country, some items may be cancelled if they are prohibited for import in Thailand. For more details, please visit our Support Page.